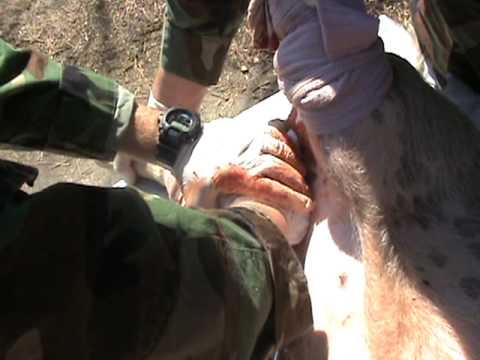 Medics and corpsmen have a wide variety of options available to train in order to render care for combat situations. But as We Are the Mighty reveals an extremely controversial training program that, even though it has long drawn the ire of PETA, offers the best way for medics to prepare for when their skills are needed.

The program is mostly referred to as live tissue trauma training (LTTT), respectfully, and it involves animals being given large amounts of anesthesia before an instructor inflicts injuries on them. There are intense situations where animals are either shot or burned or may have broken bones or puncture wounds. During the training the medic has to save the animal’s life, but the instructor can still inflict damage on the patient which forces the student to prioritize injuries. When training is done, the animal is euthanized before it can regain consciousness.

While brutal from a civilian perspective, the program has large amounts of support in the military. Surgeon Generals on down to Navy Seals and Special Forces operatives have sworn by the LTTT program’s effectiveness. The surgical live tissue training, however, has been canceled resulting from PETA’s lobbying. Upon looking at the below video, I can understand why the program is controversial but, ultimately, it is needed. If PETA is successful and the practice of live tissue trauma training is ended, it will result in even more serious injuries or either deaths of US Armed Forces personnel. Then again, that is probably PETA’s intention after all.