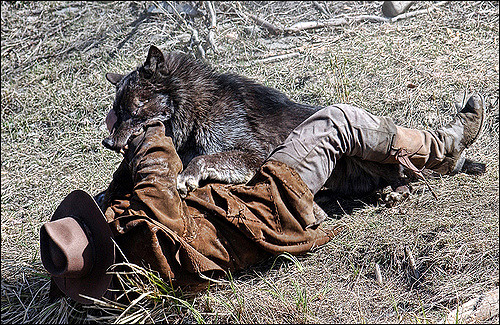 During November of last year, animal rights activists in Germany migrated to the forests of Upper Lausitz near Germany’s border with Poland hoping to prevent a cull of a wolf pack that slaughtered area farmer sheep populations.

According to the UK Telegraph, wolves were almost considered extinct in Germany during the early part of the 20th century. However, when the Soviet Union and its Eastern Bloc colonies collapsed, wolves cloistered to eastern Europe made their way into Germany due to a lack of border defenses.

Germany also has strict endangered species laws that apply to wolves. The collapse of the Iron Curtain and the rapid increase in wolf populations resulting from their migrating from eastern Europe and being given endangered species status is the perfect storm for wolf contact with German citizens and attacks on farm animals.

According the The Economist, wolf populations in Germany are on the rise with the total population at around 1000. Consequently, a local newspaper in Lower Saxony recently estimated that farm animals killed by wolves rose from 178 to 403 last year and livestock deaths are spreading. The government of Germany is proposing to allow farmers to shoot wolves – but only as a last resort. Meantime, hundreds of animal rights activists protested the German government’s proposals (which include lifting hunting restrictions and administering contraception to wolves) outside the Reichstag on May 5th.

The sinister reason why environmentalists usually want wolves protected is simple: reduced carbon emissions. Studies have been done correlating emissions from livestock as contributing to climate change and environmentalists see wolves as a means to an end. Their animal rights activist buddies, in turn, help their fellow greens out by opposing hunting efforts.

By making the wolf population larger, it not only makes it more likely that animals used in meat production will be attacked and even eaten by wolves rendering them useless for human consumption, it is also results in devastating animal populations used by humans (such as sheep) to make clothes. It is a revolting concept greens have pushing for policies to help enlarge wolf populations which they claim is grounded in their idea of balancing the eco-system.

In reality, it is a form of behavior modification grounded in the purest evil since livestock attacks contribute to ratcheting up meat and poultry prices and prevent using animal fur or sheep wool used to make clothes. High meat prices, greens hope, will prod people to become vegetarians or vegans while also curbing human activity to help the planet’s climate.

In environmentalist’s minds, another benefit with having larger wolf populations is that increases the likelihood mean not only will the human food supply will drop, but fewer clothes made using animal fur made. The end result is not only would humans be attacked but the wolves will kill livestock animals. Increased wolf populations also mean increased human contact with them and it would also help get rid of what gang green sees as the root cause of Earth’s problems: mankind itself.

NOTE: This is a slightly modified version of a previously posted essay on the same subject.