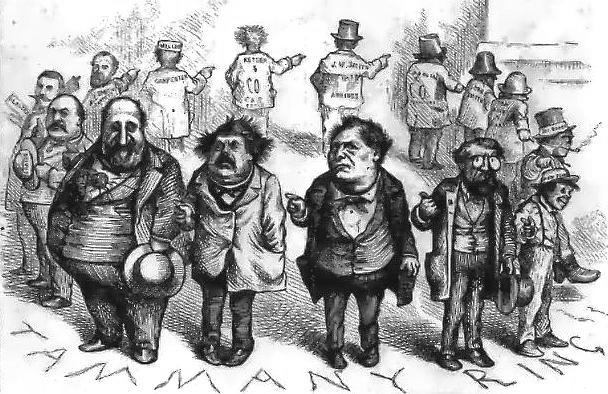 Tracing his rise to political power in post Civil War New York City, this video explores the political life of William Boss Tweed. He was a man who may have started off with good intentions as a political reformer, but the power he acquired went to his head.

Tweed’s political operation is the model for a number of Democrat machines and, in light of recent events, it is obvious Democrats are trying to apply it nationwide. As the video reveals, among the ways Tweed kept control of New York was through the usage of violent gangs and rigged elections. Sound familiar? If you have any interest in how Tweed’s political organization operated, you can read about it here.

PHOTO CREDIT: A Thomas Nast cartoon published in Harper’s Weekly of Boss Tweed’s ring of corruption. From left to right: William Tweed, Peter B. Sweeny, Richard B. Connolly, and Oakey Hall. To the left of Tweed in the background are James H. Ingersoll and Andrew Garvey, city contractors involved with much of the city construction. Cropped by Beyond My Ken Uploaded by Beyond My Ken at en.wikipedia – Political cartoon by Thomas Nast in Harper’s Weekly [1], Public Domain, https://commons.wikimedia.org/w/index.php?curid=16468923