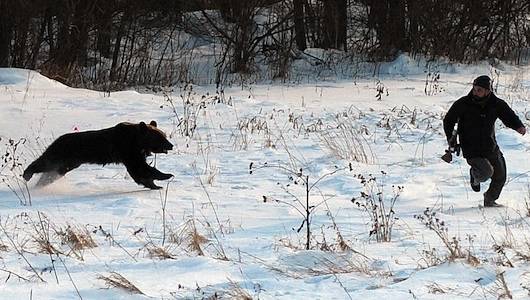 Bill Crain is on a mission. He along with two other activists were sentenced yesterday to 10 days in jail in an Andover Township, New Jersey court. According to the New Jersey Herald trio were arrested October 10th and charged with supposedly walking beyond a barricade established to keep protesters away from an inspection station in Fredon where hunters return with bears they successfully hunted.

While Crain has been able to avoid jail time before, his luck has run out. Because of his constant, previous violations the judge who oversaw the case imposed a 10 day jail sentence, respectfully. Crain alleges he is objecting to an annual bear hunt that takes place in Andover Township every year for six days in December. This time, however, the bear hunt was extended an additional six days this year in order to permit hunters who use bows and arrows or muzzle loaded weapons. The annual cull is approved by the state of New Jersey and is used to reduce the population of black bars in the region. Consequently, Crain decided to use the occasion to highlight his cause.

The portrait the New Jersey Herald paints about Bill Crain is as if he is some sort of underdog crusader. However, we see (yet again) an animal rights activist taking the side of animals (in this case bears) over the lives and health of humans. If people, like Bill Crain, are successful, efforts will no longer need to be made by greens to outlaw hunting in places like the Andover Township since they were able to do so by preventing the hunting of black bears. The same is true for any other animal population environmentalists seek to prevent the hunting of be it deer or even wolves. Environmentalists envision a nature-based army of animal predators eventually overwhelming mankind to the point where humans starve due to lack of food or are killed by animals while out in the wilderness.