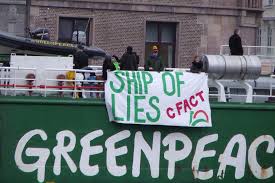 Two New Zealand Greenpeace activists and the head of the country’s Greenpeace chapter have been charged with interfering with the activities of a oil exploration vessel.

According to 1NewsNow out of New Zealand, NZ Greenpeace head Russel Norman and activists Sara Howell and Gavin Mulvay were charged under the country’s under Section 101B(1)(c) of the Crown Minerals Act that was enacted during 2013. The statute outlaws people from interfering with the operational area of a ship engaged in oil prospecting activities.

The action happened yesterday when Greenpeace activists placed themselves in the way of the ship Amazon Warrior which was conducting surveying of New Zealand waters related to oil prospecting. The result was the Amazon Warrior had to change course.

The basis of environmentalist ethics is the destruction of civilization and their embracing and harping on the global warming issue linking climate change to fossil fuel use is a method they use to condemn human beings for being prosperous. Fossil fuel use is the foundation of our civilization which includes the comforts and prosperity we enjoy in industrialized countries. Groups, like Greenpeace, prefer to revert mankind back to the stone age and they attack and obstruct the operations of companies who are involved in fossil fuel production and exploration.