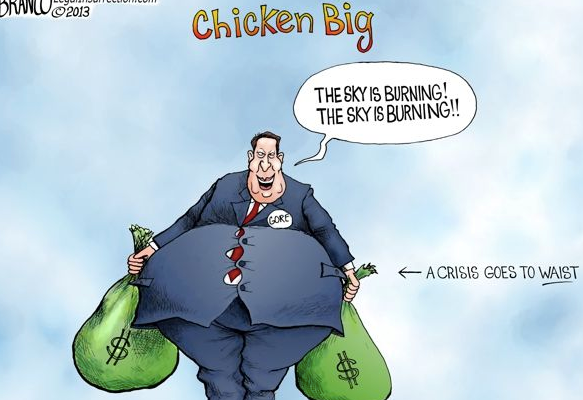 On January 4th, former Vice President Al Gore tweeted about the record cold the US was experiencing saying: It’s bitter cold in parts of the US, but climate scientist Dr. Michael Mann explains that’s exactly what we should expect from the climate crisis.

Gore linked to a pamphlet authored by Dr. Michael Mann who is also the main scientist behind the infamous, and now debunked, hockey stick chart in which Mann ties the bitter cold then to human activity.

There were a flurry of responses after Gore’s tweet affirming or denying Gore’s claim. What is also of note is not only Scientific American denying the link, but of all sources weighing to deny humans caused the cold snap is the Associated Press!

The press agency cites a study by the World Weather Attribution. The group of scientists examined weather records as far back as 1880 and discovered the cold weather that hit part of the U.S. tends to occur once every 250 years. The manuscript even states the researchers found no proof linking melting Arctic sea ice to bursts of cold air that leave due to venting at the top of the Earth. The AP reports:

Frigid weather like the two-week cold spell that began around Christmas is 15 times rarer than it was a century ago, according to a team of international scientists who does real-time analyses to see if extreme weather events are natural or more likely to happen because of climate change.

The cold snap that gripped the East Coast and Midwest region was a rarity that bucks the warming trend, said researcher Claudia Tebaldi of the National Center for Atmospheric Research and the private organization Climate Central.

The same team had connected several weather events last year to man-made global warming including Hurricane Harvey that battered the U.S. and Caribbean and the French floods.

Essentially, the cold spell in early January was a freak of nature, and not due to human-caused climate change. It is not often the mainstream media gets it right but in this case they did and that even includes Scientific American that is notorious climate alarmist news source.

Hell may have just frozen over, but even the cold will eventually thaw.