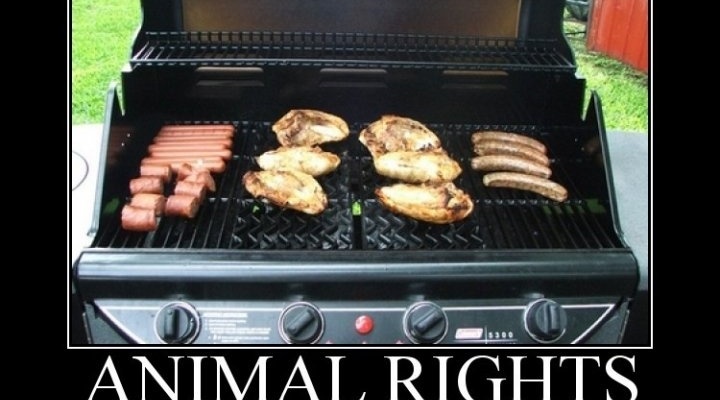 In less than a year’s time animal rights activists have trespassed in a meat processing facility owned by Tyson Foods. USA Today reveals that for the fourth instance, Mercy for Animals (yeah, right) activists illegally filmed what they allege is brutal treatment of chickens at a Tyson-owned contract farm in Lewisburg, Tennessee.

The new video from the Los Angeles-based Mercy for Animals was filmed at a Tyson contract farm in Lewisburg, Tenn., and shows images of deformed birds, filthy conditions and sickly chickens that the group claims are bred so fast they are unable to carry their own weight.

During October of last year, Tyson fired two employees for misconduct resulting from footage Mercy for Animals (yeah, right) activists illegally filmed while trespassing at one of the company’s meat processing plants in Carthage, Mississippi.

USA Today states the campaign is part of an effort seeking to pressure the poultry industry to change labor conditions for employees and housing for animals. The reality is quite the opposite of what the press reports.

For example, an incident in Petaluma, California that took place last year. Mercy for Animals (yeah, right) lied to authorities about ducks being treated inhumanely at a local duck farm. When local police arrived they investigated the allegations of misconduct and concluded there was no mistreatment and the farm was conducting business that is standard for a slaughterhouse.

Then there is the video the group filmed at a Wisconsin dairy farm during November of 2014. Farm employees stood accused of abusing cows, but it was later determined that the employees used their methods in order to get the cows up from the floor or they could die.

Another incident of alleged animal abuse taken at a meat processing plant in Petaluma during January of 2015. An egg farm that supplies Whole Foods supermarkets stood accused by the animal rights group Direct Action Everywhere of abusing chickens in which the group claimed they had a video to prove it. It was later revealed that the video was spliced together from footage since the plant’s owners pointed out chickens featured were not part of the egg farm’s Certified Humane program.

Rather than seeing man prosper and live, like any environmentalist group, animal rights organizations prefer mankind to be eradicated from the face of the Earth. The best way to do that is to attack the human food supply piecemeal like they attempted to do with Petaluma Farms and at the Sonoma County duck farm. Doing this results in restricting the food supply which, in turn, results in starvations.