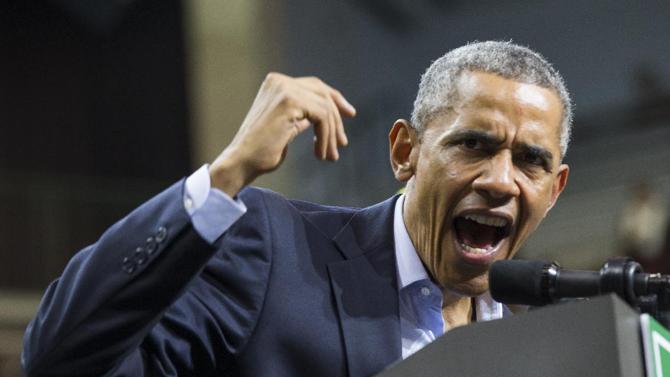 As the Environmental Protection Agency (EPA) drew up standards went for constraining carbon emissions from power plants, The Washington Times reported yesterday that key partners — including the American open — had practically zero impact over the level headed discussion while intense natural lobbyist gatherings were given extraordinary access to and impact over organization authorities.

Chicanery between the EPA and the environmentalists is nothing new, they’ve been doing it for quite a long time. However, the study makes clear that the EPA and top environmental groups see themselves as deeply intertwined in the push to cut carbon pollution and pursue other pieces of President Obama’s broad, controversial climate-change agenda.

This and fundamentally everything Obama has done in office are a piece of an allegorical war on Americans that hits those at the middle class and poor the hardest. These radicals need to work a major change of America that will result in not only industrial destruction but also suffering on a massive scale.

Obama’s expressed objective is to pound companies that create power and shut down the country’s coal mines on the hypothesis that smoldering coal to produce power produces barometrical contamination that goes past subjectively decided satisfactory levels. This brought on cheers from environmentalists calling the shots in what used to be the smoke-filled rooms of the United States Capitol.

Giving a sign he would be a means to an end of the environmentalist movement that for so long has had held policymaking by the throat, during the 2008 presidential crusade Obama bluntly told news correspondents that his energy controls would bring about energy costs to necessarily skyrocket.

According to the San Francisco Chronicle, Obama said: Because I’m capping greenhouse gases, coal power plants, you know, natural gas, you name it — whatever the plants were, whatever the industry was, uh, they would have to retrofit their operations. That will cost money.

A report issued by the Senate Environment and Public Works Committee entitled: Obama’s Carbon Mandate: an account of collusion, cutting corners, and costing Americans billions spells out the corruption and collaboration between President Obama and environmentalist groups.

The manuscript draws from archives of the EPA and Natural Resources Defense Council (NRDC) in which the report shows the government office’s undignified attempts to maintain a strategic distance from responsibility in its push to slap forceful regulations on businesses that emanate carbon dioxide (CO2), the same benevolent gas you breathe out from your lungs and is a necessary component of photosynthesis, the procedure by which plants develop. Environmentalists deceitfully allege CO2 it is a dreadful toxin that is resulting in global warming.

The report also shows that EPA policy makers and environmental activists involved had cozy relationships with each other on not only a personal level but through like-minded activism from years of working together. In spite of the fact that the organization and NRDC might not have constantly concurred on strategies they worked incessantly over the years to develop a unified public message in support of these rules.

Among such endeavors were coordination on media reactions and exchanges with the Obama Administration on disseminating information (like was seen with John Stewart). The gatherings included attempted to shift the public debate away from using cap-and-trade to fight climate change to touting these rules as needed to limit carbon emissions from power plants to ostensibly improve public health.

During 2013, the President began an all-hands-on-deck climate strategy that came out to be Obama’s Climate Action Plan to quiet threats of additional litigation from environmental activists and to set in motion executive action for what he could not achieve through legislation with the goal of the President fulfilling his promise to address climate change.

This is what is known as lawfare which is lawsuit and warfare all rolled into one. It is a method whereby organization partners sue the legislature with a specific end goal to accomplish an objective. For this situation, the constitutional procedures were not unwelcome. Lawfare normally includes what results in a hard sell or high pressure strategies. On an imagined, facilitated timetable in view of a false claim that action is desperately required, the organization schemed with environmentalist groups in a sue-and-settle plan that achieves an organization’s goals through litigation. In the process, the report said, the EPA intentionally banned other interested parties and the public and short-circuit[ed] a more deliberate rule making process.

Cato scholar, Paul Knappenberger also followed suit by condemning Obama’s policy, stating that the majority of carbon emissions hail from the developing world. Not matter what the U.S. government does, he essentially says, it will make no difference in global emission levels. Knappenberger also states that Obama’s scheme also calls for the intentional delay in human development and the plan’s actual impact on climate turns out to be largely undetectable and the public health benefits tenuous, at best.

But if there is any further doubt about collusion between environmentalists and the Obama Administration, The Huffington Post reported last year that Rhea Suh who served as an assistant secretary in the Interior Department was just named head of the NRDC.

Carbon is the basis of life on Earth and carbon emissions are the result of production and productivity which is the result of trade. To restrict carbon emissions from human activities is not only will result in limitations of movement that result in people (especially in the Third World) being driven into poverty. The symbolism behind President Obama conspiring with environmentalists who are united in their hostility to greenhouse gas emissions is not only shameful but abundantly clear that they see humans as a means to an end to sacrifice to the needs of nature and not out of wanting clean air. In the case of Obama, he will use any legal means necessary in his obsession to secure his environmental legacy by achieving his goal in the backs of the poor and middle class.