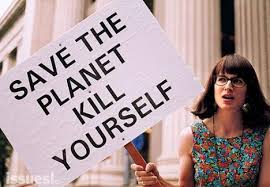 An essay published in The Guardian Friday by one of the founders of the Voluntary Human Extinction Movement. These are the kind of whackos Great Britain’s signature far-left rag offers a platform to. While Knight doesn’t think all species should die, why shouldn’t they? If life is as evil as he says it is, then Knight should go all the way, including exterminating himself (i.e. him first). Perhaps the only silver lining in all of this is that this is an example as to how self-destructive or life negating Leftism (more broadly) and environmentalism (more specifically) truly is.

“Fifty years ago, I concluded that the best thing for the planet would be a peaceful phase-out of human existence. We’re causing the extinction of hundreds of thousands of other species. With us gone, I believe ecosystems will be restored and there will be enough of everything. No more fighting over resources. The idea wasn’t as well received as I had hoped.

My journey to advocating for voluntary human extinction began at school. I was born in the post-war baby boom in a small desert town in Oregon, in the US. There were more new students than the elementary school could cope with, so classes overflowed into churches. In my fourth year, we were taught in the county library; people checked out books as we learned. High school was the same: the cafeteria had to be converted into classrooms. There just weren’t enough resources – a situation that remains the same as we boomers enter our final decades.

After an involuntary stint in the army, I read Paul Ehrlich’s book Population Bomb, which argued that overpopulation would lead to food shortages and famine, and soon joined a movement called Zero Population Growth. Their slogan was Stop at Two, but it didn’t take much maths to work out that this would take too long. We were already overpopulated at 3.7 billion: instead of stopping at two children, we needed to stop at once.

At 25, I wanted to show I was serious. A medical school gave me a discounted vasectomy in exchange for being a student doctor’s first try at the procedure, which was successful.

I became a supply teacher, which gave me plenty of free time to study population issues. In the summers, I hitchhiked around the US, as many thousands did in the 1970s. Everywhere, people told me that their locale used to be so nice before all these people moved in, and it became too crowded. In the late 1980s, I settled in Portland, Oregon, and began to call this concept the Voluntary Human Extinction Movement. Our message is simple: we encourage people to stop procreating so the biosphere might return to its former glory, and everyone already here will be able to live life more abundantly.”